This Halloween will be unlike any in recent memory, with most of us huddling in our homes enjoying more private celebrations. On the upside, not going out provides the perfect opportunity to stream your favorite scary movies—plus the ones you’ve heard about but never got a chance to see.

We’ve combed the libraries of all the top streaming services—paid and free alike—to discover which ones best represent the horrific mood of the holiday. We then picked some of their best offerings to highlight. Now, pull the shades, light a candle, grab some popcorn, and press play. It’s Halloween! 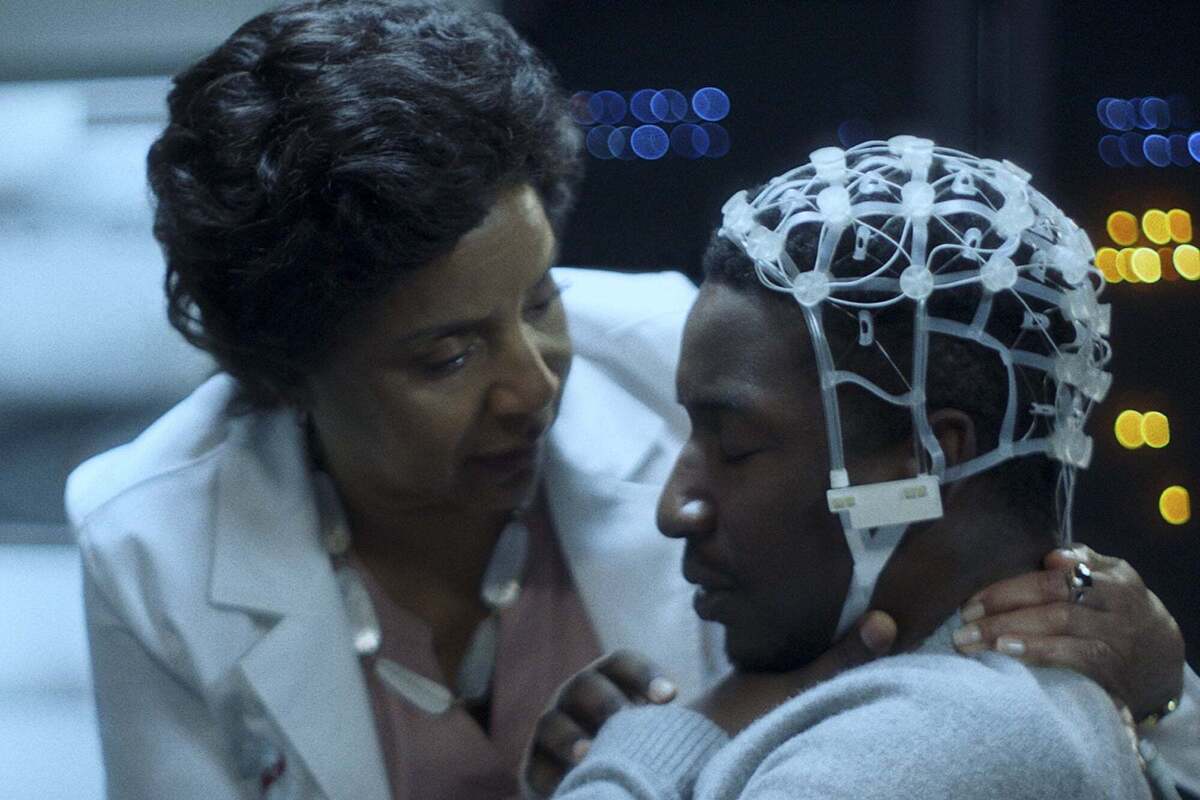 Nolan (Mamoudou Athie) tries radical measures to restore his memory so he can take care of his daughter Ava (Amanda Christine) in Black Box.

Amazon Prime has a surprisingly massive library of movies available for streaming, including roughly 3,000 horror-related movies and shows, although you’ll need to dig deep to find the gems. Well, here’s a better idea: Just tap these movie titles into the search box (or speak into your remote, if it supports voice commands): Some must-see titles include Herk Harvey’s essential, nightmarish Carnival of Souls (1962); Robert Altman’s eerie, arty Images (1972); Nicolas Roeg’s visceral Don’t Look Now (1973); Philip Kaufman’s brilliant, terrifying Invasion of the Body Snatchers (1978); Dario Argento’s gory Opera (1987), and Drew Goddard’s clever The Cabin in the Woods (2012). Fright Night and C.H.U.D. are two of the great horror movies to come out in the 1980s. And if you haven’t seen these more recent intense chillers, now is the perfect time: Hereditary, Midsommar, The Lighthouse, and Train to Busan.

The highlight this year is the launch of four new exclusive Blumhouse movies, from that stalwart horror producer Jason Blum (Paranormal Activity, The Purge, etc.). Black Box tells the story of a widower who lost his memory in an accident and undertakes experimental treatments to get it back. The Lie is about a mother and father who attempt to protect their teen daughter after her friend tumbles over an icy bridge. Nocturne involves twin girls, both classical musicians, who viciously compete with one another for excellence; one gets the advantage with the use of a mysterious notebook. And Evil Eye  concerns a mother who becomes convinced that her daughter’s new boyfriend is the reincarnation of a murderer. None of these titles are anywhere close to great, but they’re all decent, and—for scaredy-cats—only mildly spooky. 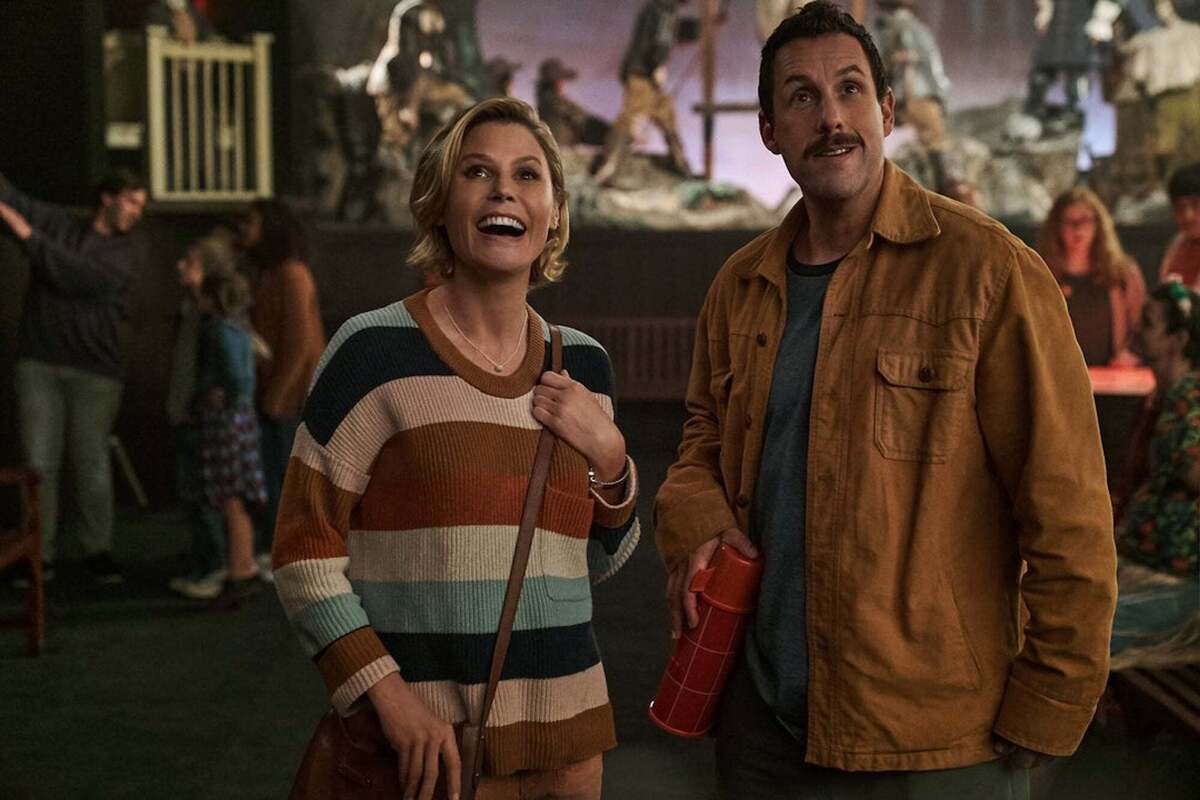 This month Netflix has a “Halloween” tab along with its usual “Horror” tab. Just look under “genres.” This essential service just dropped the seasonal Adam Sandler comedy Hubie Halloween, which, like most Adam Sandler movies, isn’t very good but is likely to be fairly popular. Sandler plays Hubie, a man-child in Salem, Mass. who takes it upon himself to make sure all the townspeople stay safe on Halloween. As a PG-13 movie, it’s mostly harmless with some bathroom-type humor, some nice autumn scenery and a cast consisting of Sandler’s best pals (Kevin James, Steve Buscemi, Rob Schneider, etc.) as well as Ray Liotta, Noah Schnapp (Stranger Things), Maya Rudolph, Tim Meadows, Michael Chiklis, June Squibb as Hubie’s mom, and some other guest stars.

Speaking of Stranger Things, the three seasons of that superb Netflix show (Season Four is coming… someday) make perfect Halloween viewing, and Season Two is even set on Halloween. Otherwise, Netflix offers more than 100 horror-themed series, including its own The Haunting of Hill House, as well as things like The Walking Dead, Hannibal, Supernatural, American Horror Story, Penny Dreadful, Ash vs. Evil Dead, and even Scooby-Doo!: Mystery Incorporated and the original, classic The Twilight Zone! Filmmaker Mike Flanagan’s new series, The Haunting of Bly Manor (the follow-up to The Haunting of Hill House) recently dropped as well. 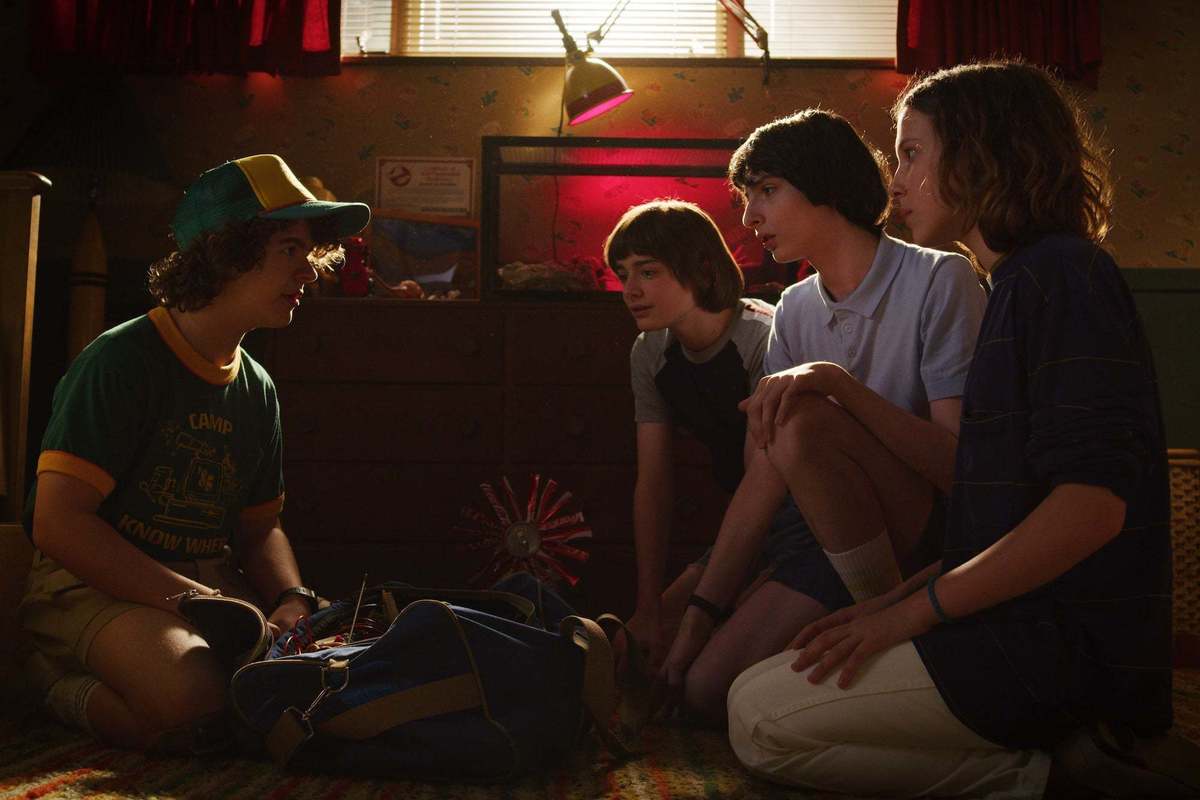 The service currently hosts close to 300 scary movies to watch, including some excellent picks: Poltergeist (1982); The Evil Dead (1983); The Silence of the Lambs (1991); Sleepy Hollow (1999); the excellent, terrifying Session 9 (2001); and The Autopsy of Jane Doe (2016). You’ll also find some very good new 2020 releases, including We Summon the Darkness, about a gang of killers encountered at a heavy metal concert; and 1BR, about the perfect apartment that turns out to be not so perfect. Some recommended Netflix originals and exclusives that will always have a home there include: I Am the Pretty Thing That Lives in the House (2016), Gerald’s Game (2017), The Babysitter (2017), Cam (2018), and The Perfection (2019). And don’t be afraid to check out two very spooky foreign-language films, Veronica (2017), from Spain, and Under the Shadow (2016), which is set in Iran. 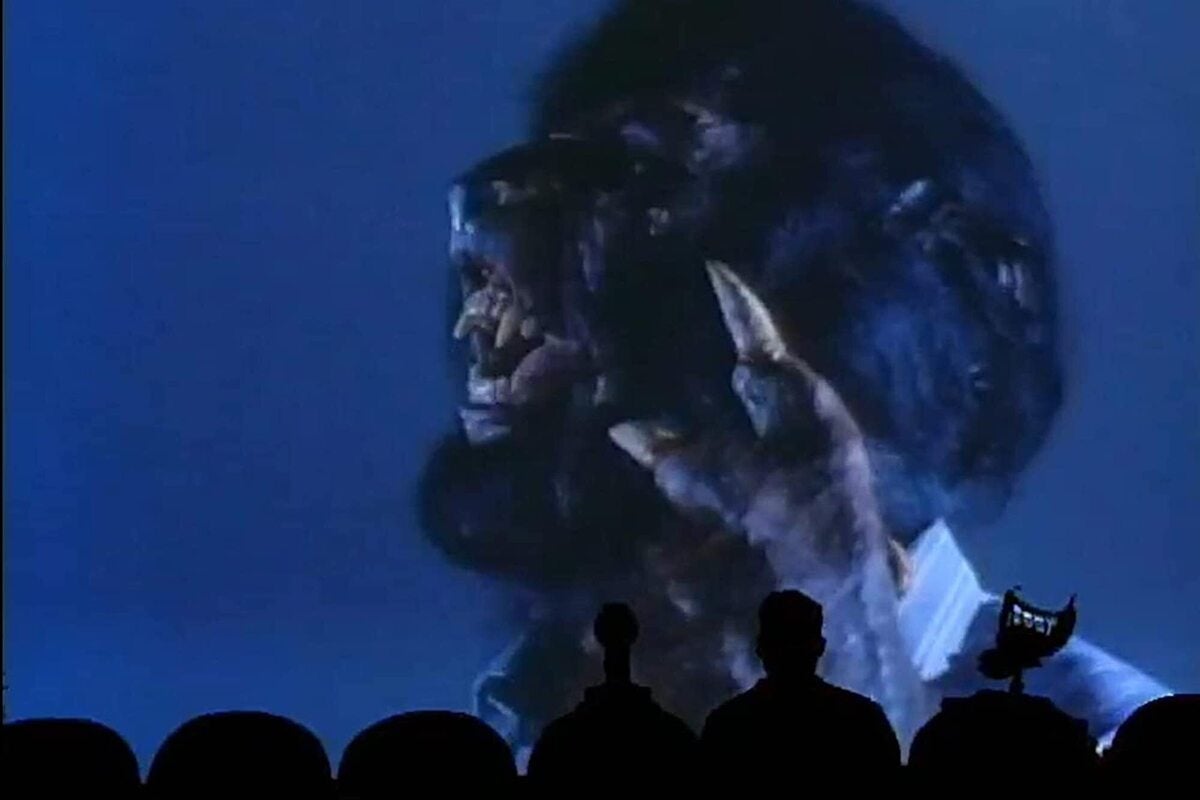 Mike Nelson and his robot friends Tom Servo and Crow watch Werewolf in an episode of Mystery Science Theater 3000.

Shout! Factory is currently one of the finest distributors of deluxe Blu-rays, with an emphasis on horror films and cult classics. They also operate their own streaming channel, which features a jaw-dropping array of more than 300 free movies and shows ranging from The Carol Burnett Show to the slasher film Chopping Mall. Their selection of horror comprises about 75 titles, but it’s a truly crazy, head-spinning batch. It includes Roger Corman’s Attack of the Crab Monsters (1957), Barbara Peeters’s Humanoids from the Deep (1980)—a rare early horror movie directed by a woman!—David Cronenberg’s masterful and supremely unsettling Dead Ringers (1988), Tobe Hooper and John Carpenter’s anthology movie Body Bags (1993), and more.

Shout! Factory TV also has a unique feature called “VHS Vault,” wherein viewers can watch one of several movies—including the camp classic Night of the Demons (1988), which is set on Halloween night, and the slasher Sleepaway Camp (1983)—as if they were on old VHS tapes, complete with smeary, soft images, tracking lines, and pan-and-scan pictures. But Shout! Factory TV’s real selling point is that it’s the home of dozens of episodes of the cult classic series Mystery Science Theater 3000, wherein a human and two robots are forced to watch bad movies (including many horror movies) while making snarky comments throughout. Currently, the service offers a 24/7 live MST3K streaming channel as well. 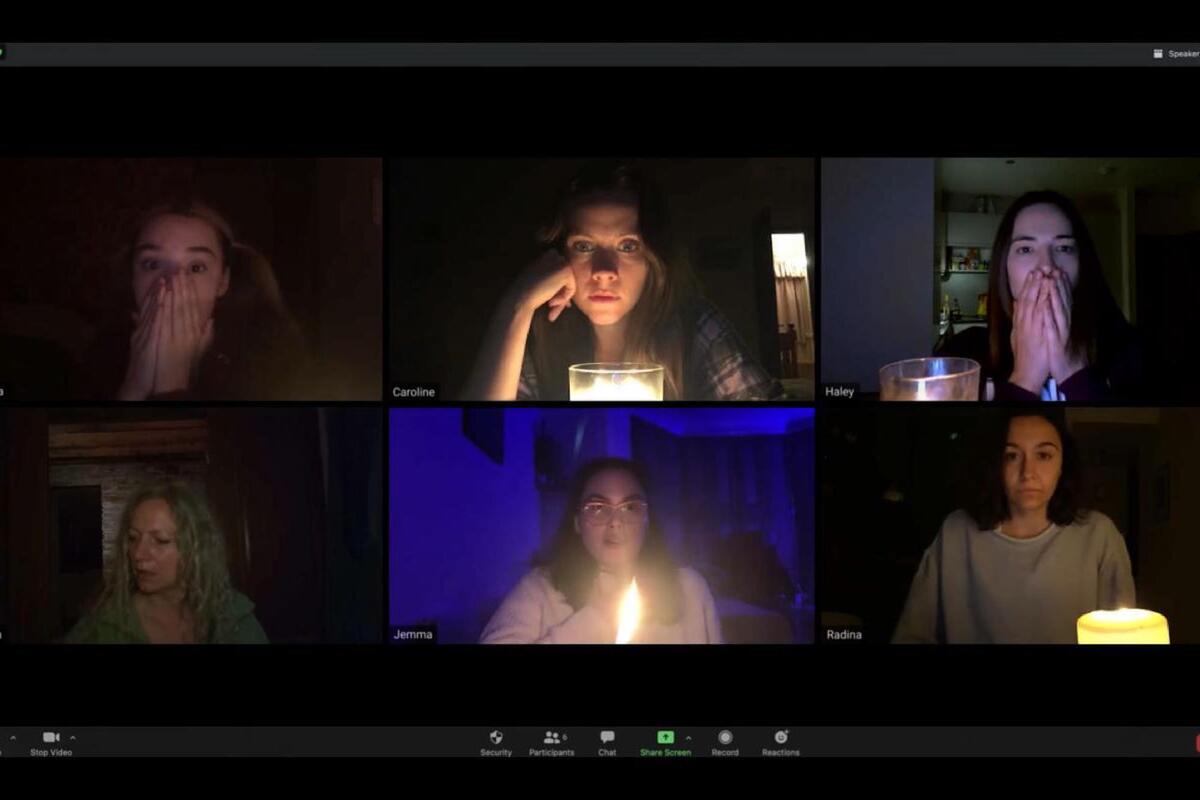 Several friends gather for a terrifying COVID-era séance over Zoom in Host.

Since its 2015 launch, Shudder has become a force to be reckoned with in the streaming world. Focusing exclusively on horror, along with some suspense thrillers and some comedies, and with an affordable price tag, the service is carefully curated so that virtually all its titles are worth considering (there’s very little filler). Additionally, like Netflix, Shudder has amassed an impressive collection of original and exclusive content. It’s the ultimate location for Halloween streaming. 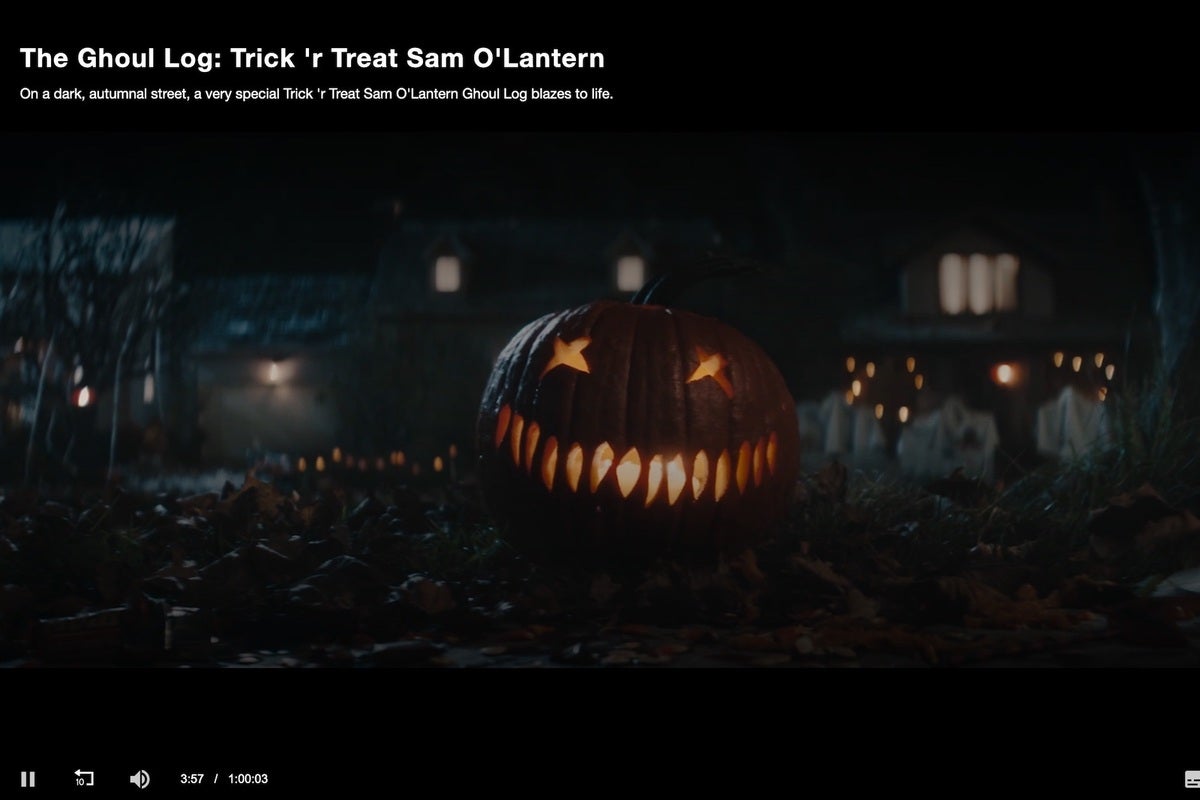 This year’s annual Shudder “Ghoul Log” is based on the cult horror movie “Trick r Treat.”

Recommended original or exclusive movies include the insane, hilarious Mayhem (2017); the bloody, feminist cat-and-mouse movie Revenge (2018); the incredible Mandy (2018)—with its top-blowing Nicolas Cage performance—the silly, spirited throwback zombie film Dead Shack (2018); Blood Quantum (2019), a zombie movie featuring an entirely indigenous cast; the superb documentary Horror Noire: A History of Black Horror (2019); the powerful, Spanish-language Tigers Are Not Afraid (2019); the masterful behind-the-scenes zombie film One Cut of the Dead (2019); Nicolas Cage again in the excellent Color Out of Space (2020), based on an H.P. Lovecraft story; the pandemic-related The Beach House (2020); and the incredible Host (2020), shot during the COVID-19 pandemic using Zoom! Also, don’t miss the original series Creepshow, a horror anthology inspired by the George A. Romero/Stephen King film.

If that’s not enough, Shudder also has The Last Drive In with Joe Bob Briggs, hosted by everyone’s favorite drive-in movie critic, and providing humorous and detailed introductions to various films. The service has not one, not two, but three 24/7 live streams of three kinds of films (“It Came from Shudder,” “Psychological Thrillers,” and “Slashics”). And they have their annual “Ghoul Log,” another 24/7 live stream of a jack-o-lantern in a Halloween setting, usually with some kind of scary surprise. This year’s Ghoul Log is inspired by the 2007 cult film Trick ‘r Treat (although, sadly, Shudder doesn’t have that movie to stream).

According to the site JustWatch.com, Tubi offers more than 3,000 free horror movies, although, like many of the other services, they tend to stack closer to the present day, and it’s likely that a good many of them are of questionable quality (after much scrolling, titles like Amityville: Mt Misery Road, Zombies of Mass Destruction, and Evil Bong started popping up). 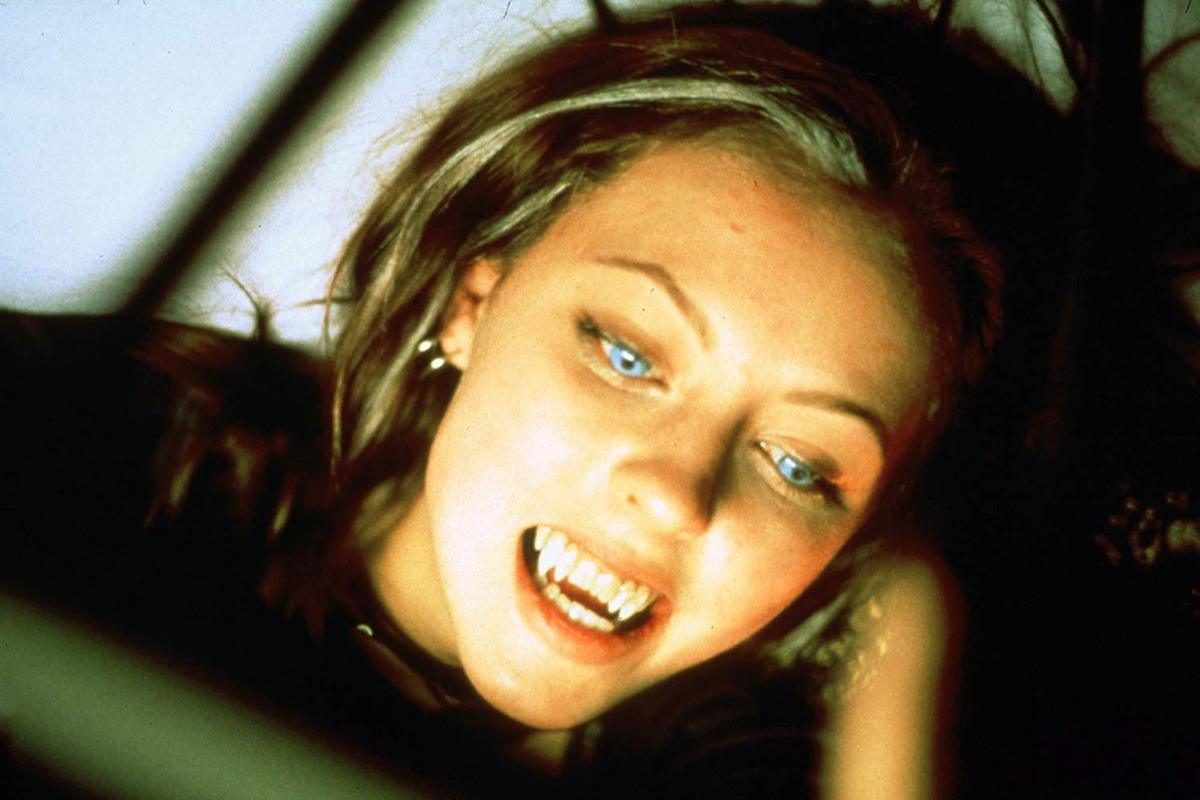 Tubi’s ads can make a viewer nuts, given that there are usually five of them at every break, and that they often repeat. But you can’t argue with the price. One of the most interesting things about Tubi is that it has a large collection of films from the beloved production company Full Moon Features, perhaps best known for their low-budget Puppet Master, Trancers, and Subspecies cult-horror movies. (There’s even a tab to click on in the menu for their entire Full Moon library.)

The best movies in this subsection are by the late Stuart Gordon (who passed away in March), notably The Pit and the Pendulum (1991) and Castle Freak (1995), the latter based on a Lovecraft story. But curious viewers may want to find out what it was like in the days of renting videos on a Friday night with titles like Cannibal Women in the Avocado Jungle of Death (1989). Incidentally, Full Moon has its own pay-streaming service, Full Moon Features for those who wish to avoid ads. It costs $6.99 per month or $59.99 a year.

0 Here are all the Apple Arcade games that support controllers