For once, the Mac and iPad lead Apple’s record financial results

One of these quarters, Apple’s going to announce financial results that don’t result in some sort of record. Perhaps as soon as next quarter, even. But on Thursday, Apple announced the results of its financial third quarter of 2020—and they were an all-time third quarter record. Literally every measurable category went up, year over year. It was so sunny a set of results that Apple CEO Tim Cook seemed almost embarrassed to be reporting such huge growth amid a global pandemic and some powerful social upheaval in the United States.

In any event, here’s what I gleaned from the results and Apple’s regular post-results conference call with analysts that might provide some insight about where Apple is and where it might be going next.

This quarter’s banner numbers were led by, of all products, the Mac and the iPad. Mac revenue was up 22 percent versus the year-ago quarter. Mac sales were only slightly lower than during last year’s holiday and back-to-school quarters, which are generally by far the two best quarters for Mac sales. 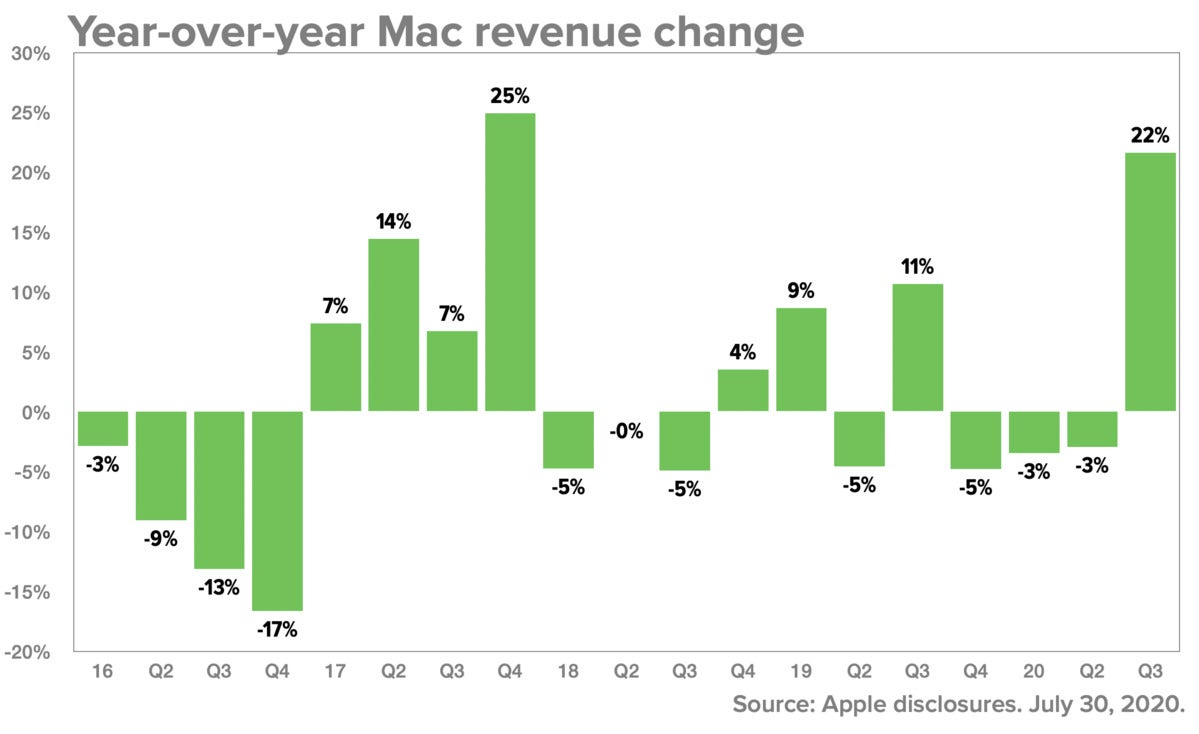 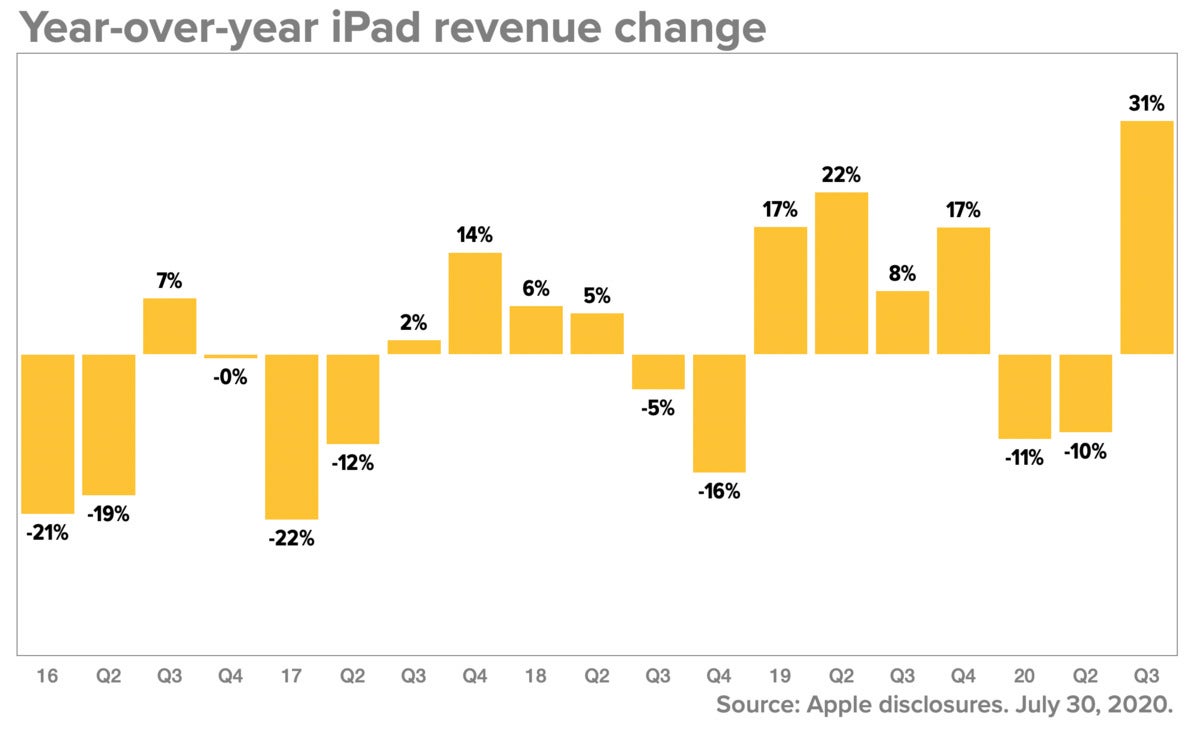 How to explain it? This was a quarter where Apple shipped two new laptops with good keyboards, probably releasing a lot of pent-up demand. And the iPad had a good keyboard story, too, with the release of the new iPad Pro and its accompanying Magic Keyboard accessory.

But I’d wager that the major contributor to this sales bump is people upgrading their work-from-home setups in response to not being able to return to their offices due to the pandemic. Cook suggested as much three months ago, based on some initial sales figures, and now we can see the numbers that motivated him to make that suggestions.

However, a few of the analysts on the call with Apple struck some warnings about the great quarter for the Mac and iPad. Doesn’t this sales bump just mean that Apple pulled forward some sales that would otherwise have been made during the back-to-school and holiday quarters? Cook says that Apple expects strong performance in the back-to-school period, but his attitude toward the holiday quarter seemed a bit more… iffy.

“I think we need to see a vaccine or a therapeutic or both, and, you know, there’s some optimism around that in that particular timeframe,” Cook said. “I think that would boost consumer confidence quite a bit if it began to happen.” Unless Cook has access to reports the rest of us don’t have (and he specifically said he didn’t), this seems a bit too optimistic. Given the current economic uncertainty, it would not be a bad bet to suggest that Apple will face a challenge at breaking any records during the upcoming holiday season.

Services and Wearables motor on

Back in 2016 Apple set a goal for itself: double the amount of revenue it generates from the Services portion of its business within five years. Four and a half years later, it has met its goal a bit early. The Services business grew by 15 percent in the past quarter, a rate of growth that it has managed for about two years now. Apple’s next goal: reach 600 million paid subscriptions before the end of calendar 2020. 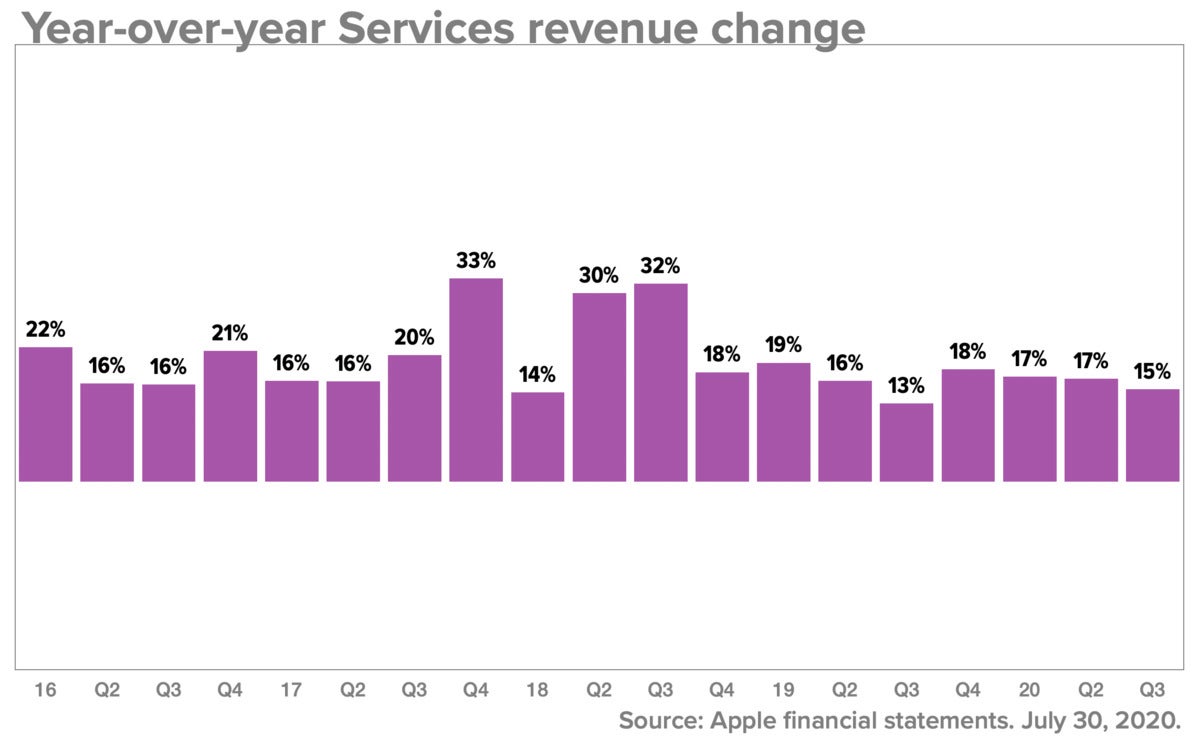 The other fast-growing Apple product category, Wearables, actually had its slowest growth quarter in three and a half years, though it still grew by 17 percent. It is hard to keep growing at 20 to 30 percent every quarter, so it is not surprising that Wearables might cool off a little bit. Cook also ascribed some weakness in the sales of Apple Watch to the fact that many prospective Apple Watch buyers want to try the watch on in a retail store and look at watch band options as well—options that were stifled in many regions due to the COVID-19 pandemic closing stores. 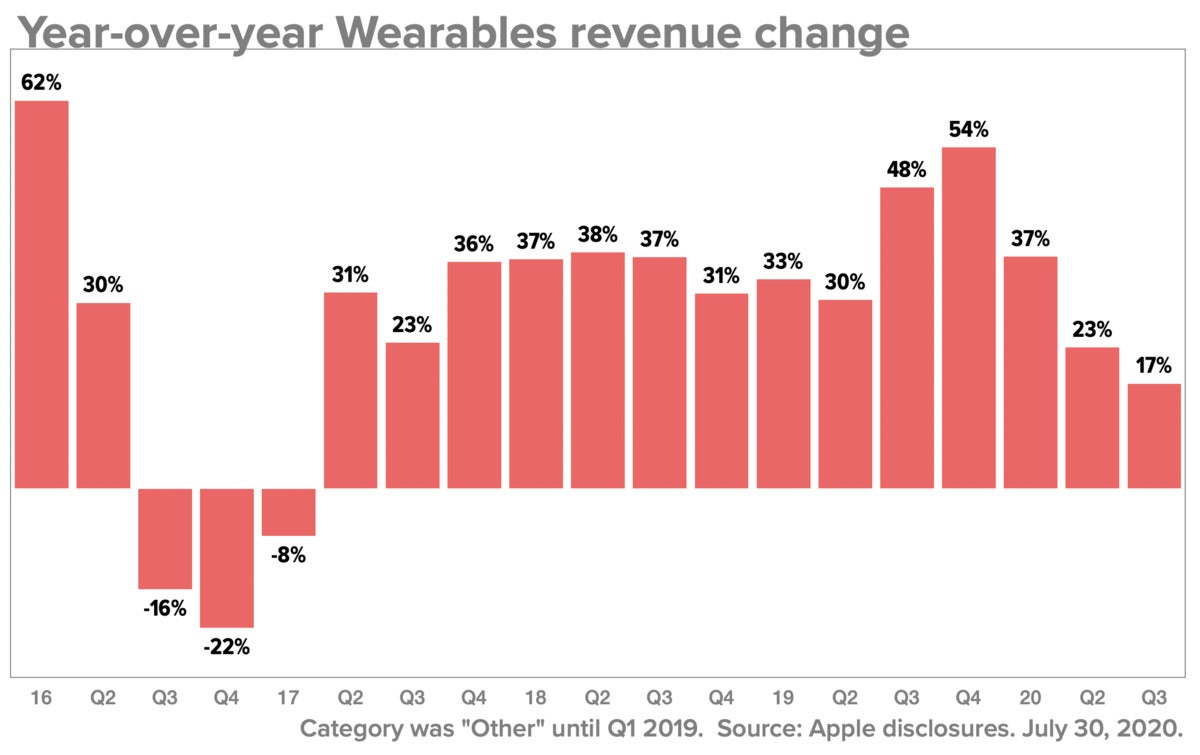 We’re at the point where we’re parsing language and slides for clues about how fast Macs running on Apple silicon might perform. So let’s parse this statement from Tim Cook: “This two-year effort will achieve both unprecedented performance for the Mac and a common architecture across all Apple products.”

Unprecedented performance! That’s a nice phrase. I like it. (I assume he doesn’t mean unprecedentedly bad.)

Cook, while scrupulously sticking to Apple’s policy not to discuss future products, did also provide this tidbit: “What we’ll wind up with is a common architecture across all of our products, which gives us some interesting things that we can do in products, that it sort of unleashes another round of innovation…. we can envision some products that we can achieve with Apple silicon that we couldn’t achieve otherwise.”

This quarter also brought a little bit of color about how well the new iPhone SE is selling. The answer is: it’s doing well! “We’re seeing a higher switcher number than we did in the previous year, which we feel very good about,” Cook said. “And it also seemed to appeal to some people that were holding onto the device a little longer because they wanted a smaller form factor phone.”

0 Reddit, LinkedIn, TikTok will issue updates to stop apps from copying the clipboard in iOS 14

0 Your iPhone unexpectedly says you’re trying to log in from far away. Time to change your password!

0 iPadOS 14 FAQ: Features, Apple Pencil, Public Beta, and everything else you need to know